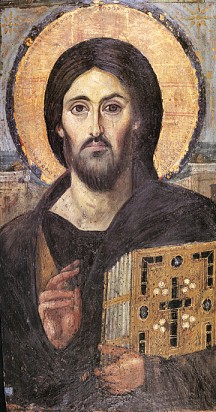 How To Set Up An Icon Corner at Home

Quantity and quality are two different things. It would be naive to assume that the more sacred images there are in an Orthodox Christian’s home, the more pious his life. A disorganized collection of icons, reproductions, and religious wall calendars covering a significant amount of living space can often have a contrary effect on one’s spiritual life.

A poorly thought-out collection of icons can turn into something simple and meaningless, in which the prayerful purpose of the icon has no place whatsoever.

Nonetheless, it is essential to have icons in one’s home in sufficient numbers, but within reasonable limits.

In the past, whether on a farm or in the city, every Orthodox family’s home would always have a shelf with icons, or an entire home iconostasis, located in the most visible place. The place where the icons were installed was known as the front corner, the beautiful corner, the holy corner, God’s place, or the kiot.

For Orthodox Christians, an icon is not just a depiction of the Lord Jesus Christ, the Mother of God, the Saints, or events from Sacred and Church History. An icon is a sacred image, i.e., it is outside the realm of ordinary reality; it is not to be confused with ordinary daily life; and it is intended only for communion with God. Thus, the primary purpose of icons is prayer. An icon is a window from our world, the earthly world, into the world above. It is God’s revelation in form and color.

In this way, an icon is not simply a family relic to be passed on from generation to generation, but a holy thing that unites all family members during communal prayer – for prayer in common can take place only if those standing before the icons have mutually forgiven one another’s offenses and achieved unity.

Today, of course, when the television set ­– which is itself a kind of a window into the motley world of human passions – has taken the place of icons in the home, the purpose of the family icon, the tradition of common prayer at home, and the consciousness of the family as the “little Church” have been lost.

Therefore, an Orthodox Christian today might ask: What icons should I have in my home? How should they be arranged? Can I use reproductions of icons? What do I do with old, dilapidated icons?

Some of these questions merit an unequivocal answer, while others do not demand any kind of strict recommendations.

Where should one place icons at home?

In a free and accessible place.

The terse nature of such an answer is prompted by the realities of life, rather than by the absence of canonical requirements.

Of course, it is preferable to place icons on the eastern wall of the room, because the “East” as a theological concept has special significance in Orthodoxy.

And the Lord God planted a garden eastward in Eden; and there he put the man whom he had formed (Genesis 2:8).

O Jerusalem, look about thee toward the east, and behold the joy that cometh unto thee from God (Baruch 4:36).

Moreover the spirit lifted me up, and brought me unto the east gate of the Lord’s house, which looketh eastward (Ezekiel 11:1).

For as the lightning cometh out of the east, and shineth even unto the west; so shall also the coming of the Son of man be (Matthew 24:27).

But what should one do if there are windows or doors on the eastern side of one’s home? In that case, use the southern, northern, or western walls.

One should not combine icons with decorative objects of a secular nature, such as statuettes, various types of pictures, etc.

It is inappropriate to put icons on a bookshelf next to books having nothing in common with the Orthodox faith or that conflict with Christian teaching on love and charity.

It is absolutely impermissible to have icons next to posters or calendars depicting rock musicians, athletes, or politicians – the idols of the current age. This not only diminishes reverence for the holy images to an unacceptable degree, but also puts holy icons on par with the idols of the contemporary world.

The home icon corner can be decorated with live flowers. Traditionally, larger icons are often framed with towels. This tradition dates back to antiquity and has a theological basis. According to tradition, an image of the Savior miraculously appeared on a towel during His earthly life to help a suffering man. After washing His Face, Christ wiped His Face with a clean towel, on which an image of His Face appeared. The towel was sent to King Abgar, who was afflicted with leprosy, in the city of Edessa in Asia Minor. Upon healing, the ruler and his subjects adopted Christianity and the Image-Not-Made-By-Hands of Jesus Christ was affixed to a “permanent panel” and raised above the city gates.

In times past, August 29 (new style), the day the Church commemorates the translation of the Image Not-Made-By-Hands of our Lord Jesus Christ from Edessa to Constantinople in 944, was known among the people as the feast of the “canvas” or “linen Savior,” and in some places fabric and towels made of homespun yarn were blessed.

These richly embroidered towels were reserved for use in the icon corner. Likewise, icons were framed by towels for use during weddings and the Blessing of Waters. Thus, for example, after the service for the Blessing of Waters, when the priest sprinkled the icons with abundant Holy Water, people would wipe the icons with special towels that they would incorporate into the icon corner.

There is a tradition that, following the celebration of the Lord’s Entry into Jerusalem (Palm Sunday), pussy willow branches that have been blessed in church are kept near the icons until the following Palm Sunday.

It is customary that on Pentecost, the Day of the Holy Trinity, homes and icons are decorated with birch branches as a symbol of the flourishing Church, bearing the grace-filled power of the Holy Spirit.

Which icons should you have at home?

It is essential to have icons of the Savior and the Mother of God. The Image of the Lord Jesus Christ, which bears witness to the Incarnation and to the salvation of mankind, and of the Theotokos – the most perfect of those who have lived on earth, who was made worthy of deification, and who is venerated as more honorable than the Cherubim and beyond compare more glorious than the Seraphim – are an essential part of the Orthodox Christian home. The icon of Christ ordinarily selected for prayer at home is a waist-length depiction of Christ Pantocrator.

Those with room for a greater number of icons in the home may supplement their icon corner with depictions of various revered saints.

It is recommended to have depictions of the Holy Evangelists, of St. John the Baptist, of the Holy Archangels Gabriel and Michael, as well as icons of the Feasts, to make a home icon corner complete.

The selection of icons for one’s home is always an individual matter. The best person to help one make these choices is one’s priest – the family’s spiritual father – and it is to him, or to another clergyman, that one should turn for advice.

As for icon reproductions and color photographs, sometimes it makes more sense to have a good reproduction than a painted icon of poor quality.

An iconographer should maintain a very demanding attitude toward his work. Just as a priest does not serve the Liturgy without due preparation, the iconographer must approach his service with full awareness of his responsibility. Unfortunately, both in the past and today, one often encounters vulgar examples of images that bear no resemblance to icons. Thus, if a given depiction does not evoke a sense of piety and a sense of contact with the holy, or if it is theologically suspect and its technical execution is unprofessional, it would be best not to purchase such an item.

However, reproductions of canonical icons, mounted on a firm backing and blessed in church, can occupy a place of honor in the home iconostasis.

How and in what order should icons be arranged?

Are there strict rules in that regard?

In church, yes. As to the home prayer corner, we may limit discussion to a few principal rules.

For example, a collection of icons hung without a sense of symmetry, without a well thought-out arrangement, evokes a constant sense of dissatisfaction with the arrangement and a desire to change everything – something that often distracts from prayer.

It is likewise essential to remember the principle of hierarchy: for example, do not place an icon of a locally-venerated saint above an icon of the Holy Trinity, the Savior, the Mother of God, or the Apostles.

Just as on a classic iconostasis, the Icon of the Savior should be to the right, and the Mother of God to the left.

What should be our attitude toward holy things?

As one of the attributes of God (Isaiah 6:3), holiness is also reflected in God’s saints and in physical objects. Therefore, reverence for holy people and sacred objects and images, as well as personal striving for authentic communion with God, are manifestations of a single order.

Family icons have always been held in particular reverence. Following baptism, an infant was brought before and icon and the priest or master of the house would read prayers. Parents blessed their children with an icon to pursue studies, to go on extended journeys, or to engage in public service. As a sign of their approval of a wedding, parents likewise blessed newlyweds with icons. Moreover, a person’s departure from this life took place in the presence of icons.

It is improper to have arguments or to engage in rowdy or otherwise improper behavior before the images of the saints.

One should instill proper reverence for holy images in children from a very early age.

What should you do if an icon’s condition has rendered it unfit for use and it cannot be restored?

Under no circumstance should such an icon, even one that has not been blessed, simply be thrown away. A holy item, even if it has lost its original appearance, should always be treated with reverence.

If the condition of the icon has deteriorated with age, it should be taken to church to be burned in the church furnace. If that proves impossible, you should burn the icon yourself and bury the ashes in a place that will not be sullied or disturbed, e.g., in a cemetery or under a tree in the garden.

The faces that look at us from icons belong to eternity. Gazing upon them, raise up your prayers to them, asking for their intercessions. We, the inhabitants of the earthly world, should never forget our Savior’s eternal call towards repentance, perfection, and the deification of every human soul.