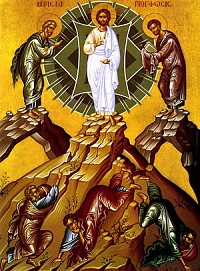 The Holy Transfiguration of our Lord God and Savior Jesus Christ

For an explanation of the present Feast and understanding of its truth, it is necessary for us to turn to the very start of today’s reading from the Gospel: “Now after six days Jesus took Peter, James and John his brother, and led them up onto a high mountain by themselves” (Mt.17:1).

First of all we must ask, from whence does the Evangelist Matthew begin to reckon with six days? From what sort of day is it? What does the preceding turn of speech indicate, where the Savior, in teaching His disciples, said to them: “For the Son of Man shall come with his angels in the glory of His Father,” and further: “Amen I say to you, there are some standing here who shall not taste death, until they have seen the Son of Man coming in His Kingdom” (Mt.16:27-28)? That is to say, it is the Light of His own forthcoming Transfiguration which He terms the Glory of His Father and of His Kingdom.

The Evangelist Luke points this out and reveals this more clearly saying: “Now it came to pass about eight days after these words, that He took Peter and John and James, and went up the mountain to pray. And as He prayed, His countenance was altered, and His raiment became a radiant white” (Luke 9:28-29). But how can the two be reconciled, when one of them speaks definitively about the interval of time as being eight days between the sayings and the manifestation, whereas the other (says): “after six days?”

There were eight on the mountain, but only six were visible. Three, Peter, James and John, had come up with Jesus, and they saw Moses and Elias standing there and conversing with Him, so altogether there were six of them. However, the Father and the Holy Spirit were invisibly with the Lord: the Father, with His Voice testifying that this was His Beloved Son, and the Holy Spirit shining forth with Him in the radiant cloud. Thus, the six are actually eight, and there is no contradiction regarding the eight. Similarly, there is no contradiction with the Evangelists when one says “after six days,” and the other says “eight days after these words.”

But these twofold sayings as it were present is a certain format set in mystery, and together with it that of those actually present upon the Mount. It stands to reason, and everyone rationally studying in accordance with Scripture knows that the Evangelists are in agreement one with another. Luke spoke of eight days without contradicting Matthew, who declared “after six days.” There is not another day added on to represent the day on which these sayings were uttered, nor is the day on which the Lord was transfigured added on (which a rational person might reasonably imagine to be added to the days of Matthew).

The Evangelist Luke does not say “after eight days” (like the Evangelist Matthew says “after six days”), but rather “it came to pass eight days after these words.” But where the Evangelists seem to contradict one another, they actually point out to us something great and mysterious. In actual fact, why did the one say “after six days,” but the other, in ignoring the seventh day, have in mind the eighth day? It is because the great vision of the Light of the Transfiguration of the Lord is the mystery of the Eighth Day, i.e., of the future age, coming to be revealed after the passing away of the world created in six days.

About the power of the Divine Spirit, through Whom the Kingdom of God is to be revealed, the Lord predicted: “There are some standing here who shall not taste death, until they have seen the Son of Man coming in His Kingdom” (Mt.16:28). Everywhere and in every way the King will be present, and everywhere will be His Kingdom, since the advent of His Kingdom does not signify the passing over from one place to another, but rather the revelation of its power of the Divine Spirit. That is why it is said: “come in power.” And this power is not manifest to simply ordinary people, but to those standing with the Lord, that is to say, those who have affirmed their faith in Him like Peter, James and John, and especially those who are free of our natural abasement. Therefore, and precisely because of this, God manifests Himself upon the Mount, on the one hand coming down from His heights, and on the other, raising us up from the depths of abasement, since the Transcendent One takes on mortal nature. Certainly, such a manifest appearance by far transcends the utmost limits of the mind’s grasp, as effectualized by the power of the Divine Spirit.

Thus, the Light of the Transfiguration of the Lord is not something that comes to be and then vanishes, nor is it subject to the sensory faculties, although it was contemplated by corporeal eyes for a short while upon an inconsequential mountaintop. But the initiates of the Mystery, (the disciples) of the Lord at this time passed beyond mere flesh into spirit through a transformation of their senses, effectualized within them by the Spirit, and in such a way that they beheld what, and to what extent, the Divine Spirit had wrought blessedness in them to behold the Ineffable Light.

Read the rest of the article here The Feast of the Dormition of our Lady

The Theotokos, the Mother of God and Ever-Virgin Mary

The feast of the Dormition or Falling-asleep of the Theotokos is celebrated on the fifteenth of August, preceded by a two-week fast. This feast, which is also sometimes called the Assumption, commemorates the death, resurrection and glorification of Christ’s mother. It proclaims that Mary has been “assumed” by God into the heavenly kingdom of Christ in the fullness of her spiritual and bodily existence.

As with the nativity of the Virgin and the feast of her entrance to the temple, there are no biblical or historical sources for this feast. The Tradition of the Church is that Mary died as all people die, not “voluntarily” as her Son, but by the necessity of her mortal human nature which is indivisibly bound up with the corruption of this world.

The Orthodox Church teaches that Mary is without personal sins. In the Gospel of the feast, however, in the liturgical services and in the Dormition icon, the Church proclaims as well that Mary truly needed to be saved by Christ as all human persons are saved from the trials, sufferings and death of this world; and that having truly died, she was raised up by her Son as the Mother of Life and participates already in the eternal life of paradise which is prepared and promised to all who “hear the word of God and keep it.” (Luke 11:27-28)

In giving birth, you preserved your virginity. In failing asleep you did not forsake the world, O Theotokos. You were translated to life, O Mother of Life, and by your prayers, you deliver our souls from death. (Troparion)

Neither the tomb, nor death, could hold the Theotokos, who is constant in prayer and our firm hope in her intercessions. For being the Mother of Life, she was translated to life, by the One who dwelt in her virginal womb. (Kontakion)

The services of the feast repeat the main theme, that the Mother of Life has “passed over into the heavenly joy, into the divine gladness and unending delight” of the Kingdom of her Son. (Vesper verse) The Old Testament readings, as well as the gospel readings for the Vigil and the Divine Liturgy, are exactly the same as those for the feast of the Virgin’s nativity and her entrance into the Temple. Thus, at the Vigil we again hear Mary say: “My soul magnifies the Lord and my Spirit rejoices in God my Saviour.” (Luke 1:47) At the Divine Liturgy we hear the letter to the Philippians where St. Paul speaks of the self-emptying of Christ who condescends to human servitude and ignoble death in order to be “highly exalted” by God his Father. (Philippians 2:5-11) And once again we hear in the Gospel that Mary’s blessedness belongs to all who “hear the word of God and keep it.” (Luke 11:27-28) An Introduction to the

The Creed and the Holy Trinity

Extensive and excellent guide to Orthodox

by the Orthodox Church of the Mother of God 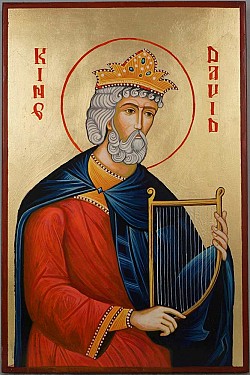 Prayers of the Hours 9:40am What in the world is an Orthodox Christian? 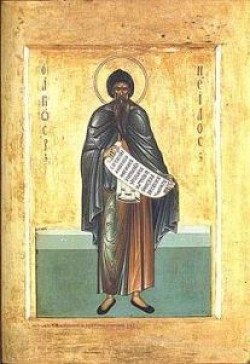 153 Texts On Prayer
The Teachings of St. Nilus of Sinai Use this time for private prayer

or volunteer your time to our parish The Three Ways of Attention and Prayer
By St. Symeon the New Theologian
Translated from Greek by Demetrios S. Skagias "Prayer without Ceasing"
Is Necessary For All Christians
By St. Gregory Palamas

Watch this (and other) videos on fullscreen!
at our Video Channel by clicking HERE

Watch this (and other) videos on fullscreen!
at our Video Channel by clicking HERE